Christmas Orchestra and the Clark's

This past weekend Bryan played in the orchestra for the services. Afterward a man came up to him and said "Even though I know you were just playing air up there, good for you for being up there." Now, we have all sorts of questions about this comment...
1. Did he sit next to Bryan and not hear him actually play?
2. Who says that kind of thing anyway?
3. Why? ...and
4. Does this man realize how hard we have laughed at this?
Then, a man came up to Bryan and said "Did you notice the male cello player? He looked just like you. I asked my wife if she thought so and she said he sort of did. Did you think so?" Bryan, being Bryan, said "yeah he kind of did." Never told him it was him. We have laughed even harder at this one. Two people said it was great to see both Bryan and I in the orchestra. So cool that he plays cello and I play violin...I don't even play a rain stick! So...not me, folks! Much laughter over that too!
By the way, the guy who looked just like Bryan did an amazing job playing the cello. 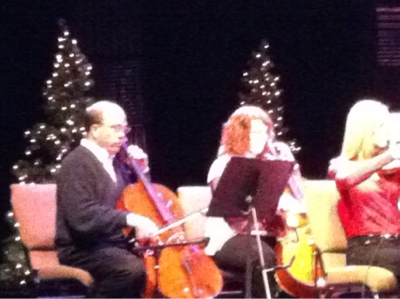