I am home from Esprit Tour. Is it telling that I had to rest for a second after the exertion of typing that first sentence? hahaha but seriously...I am tired. I keep looking at the pile of stuff that I need to unpack and putting it off. But it was a great tour and having Jayme along just made it that much better.
This was the night before we left everything neatly stacked and ready to go... 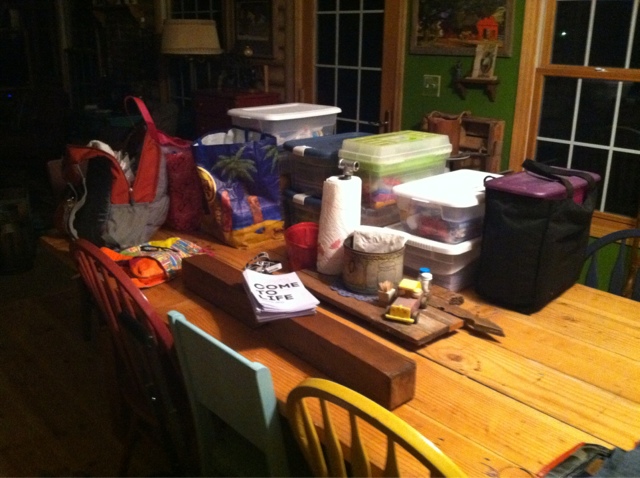 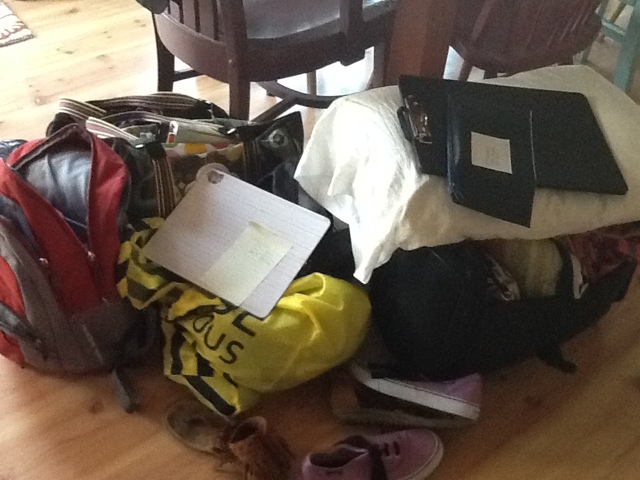 Anyway! We had a packed house at Firth Reformed Church on Sunday, July 7. It is always fun to see the whole thing come together. We left from Lincoln Berean Church on Tuesday, July 9. It is always so nice to finally sit down on the bus and be done, for just a little while, arranging, prepping and telling people what to do. The concert that night was at Camp High Hopes, Sioux City, IA. It was so fun. Those campers were so sweet. The staff was amazing and I would highly recommend that camp to any family with a special needs child or young adult in their life. Normally our on the road food that venues feed us is...well, sloppy joes or some such easy thing. But not this camp. They grilled 1" thick pork chops for all 74 of us, had roasted potatoes and applesauce. It was so good. 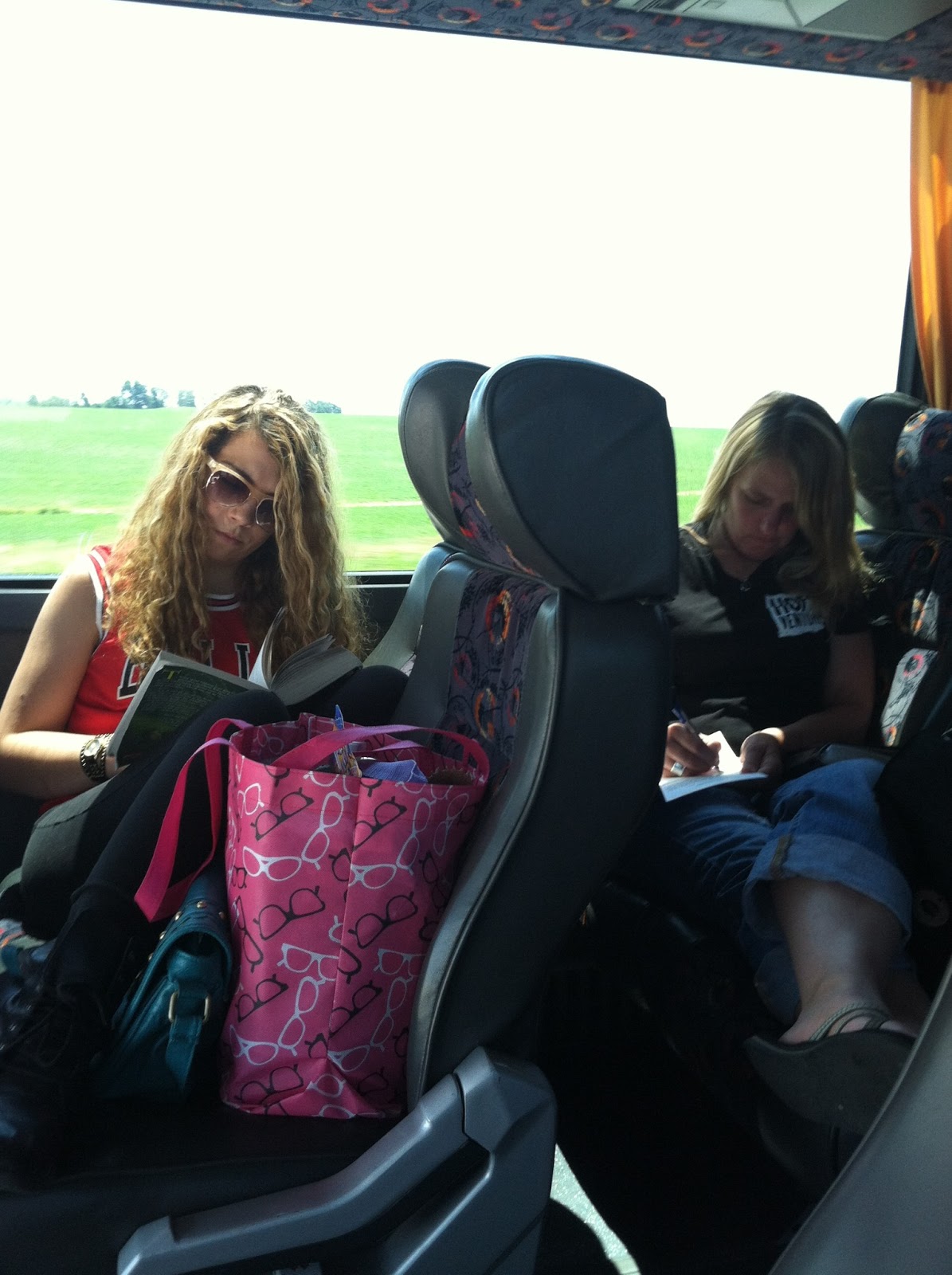 Cynci ended up on crutches for the tour but she got along just fine. Those are our bus drivers, Al and Tim. The kids warming up before the concert. 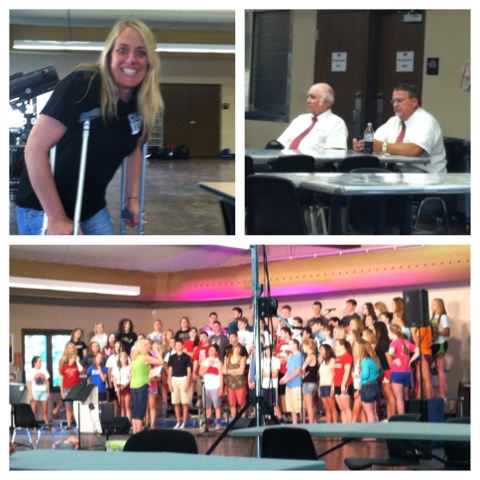 The campers wanted to teach our kids a song. 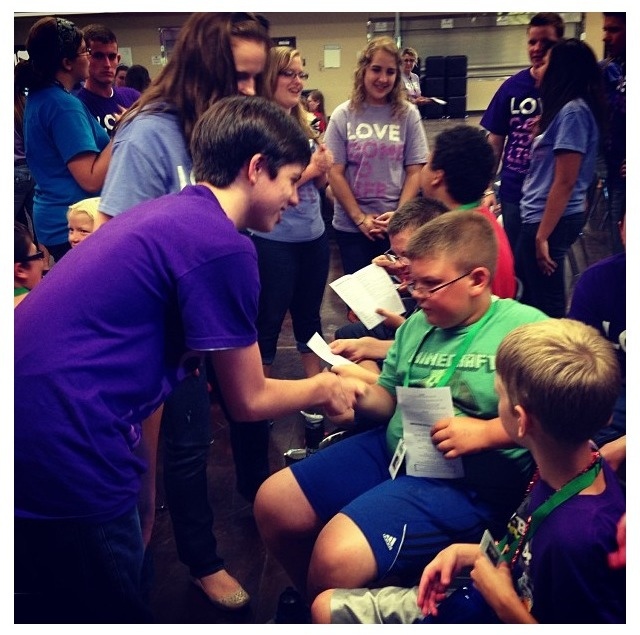 We spent the night at Stoney Creek Inn in Sioux City, IA. One of the great things about booking rooms for 74 people is that hotels that are rather expensive will give me a huge break on room cost. So we can stay in a place that is really nice for not that much money. The Stoney Creek Inn's aren't that expensive to begin with but they are so fun and really nice.

On Wednesday, July 10, we loaded up the buses and headed for St. Paul, MN to our concert at Christ Lutheran Church. This church has a wall of photos of their pastors dating back to 1868...It's been there awhile. The sanctuary had amazing acoustics. Our rendition of "It Is Well" sounded amazing in there.
Jayme, Keygan and Evan decided to go out and advertise the concert to the people passing by on the street. 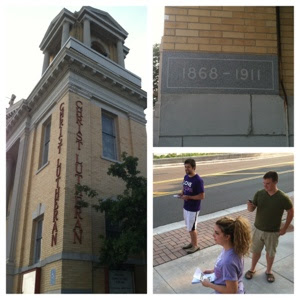 Every night these 11 kids stood up and gave the cardboard testimonies. They are amazing kids who have made amazing decisions in their lives. Very brave. Then during the song "Power of the Cross" they dropped chains down at the foot of the cross. It was a very powerful moment in the program. 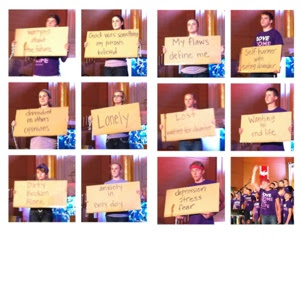 That night we spent the night in a hotel called Best Western Bandana Square. It was built in an old railroad engine repair station. The tracks ran through the foyer of the hotel and there was a little depot in the center that they used for their food court. It was really a cool hotel. Again, good prices for a large group.
Thursday morning, July 11, we only had a 45 minute drive to Shakopee, MN. We sang at Valleyfair Amusement Park at 11 a.m. 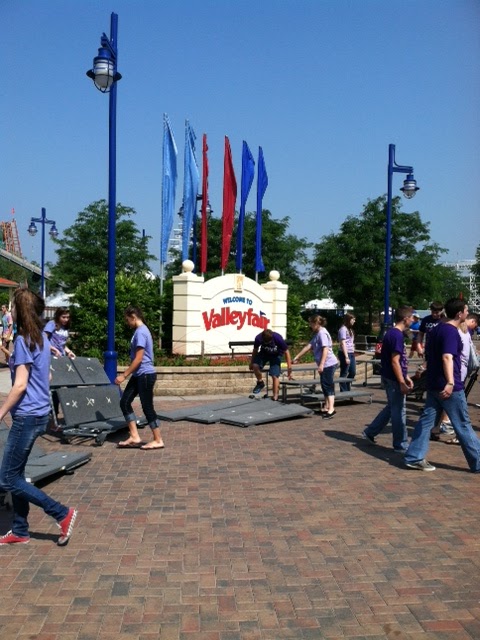 Then the kids were free to enjoy the park. Jayme, her friend Malia and I hung out all day. One of the first things we did was take in the new Dinosaurs Alive exhibit. We were glad we did. It was amazing. They came to life as you walked up to and past them. So fun. 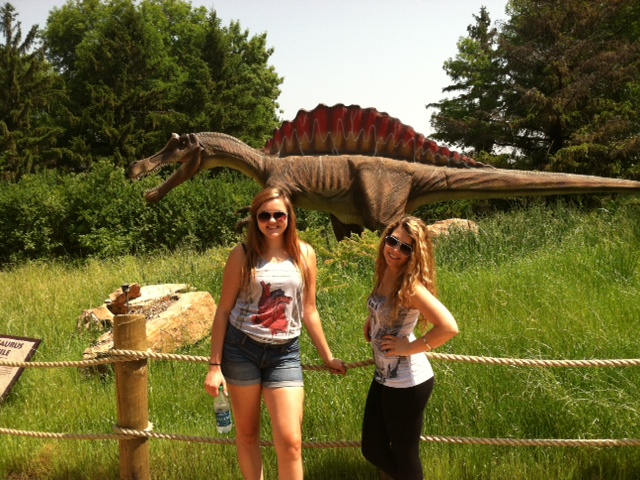 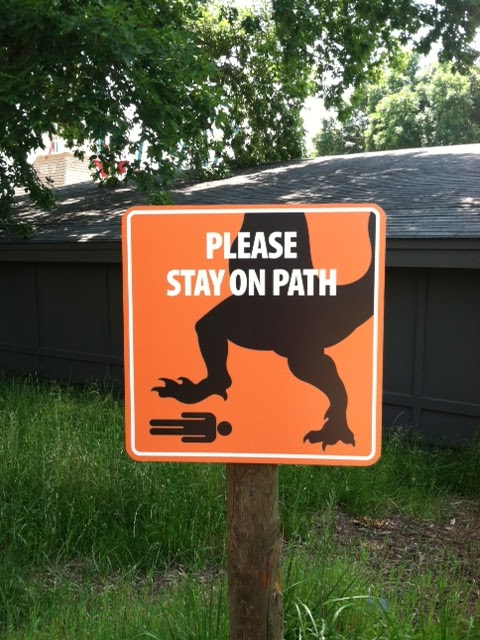 A little video of the dinosaur in action. 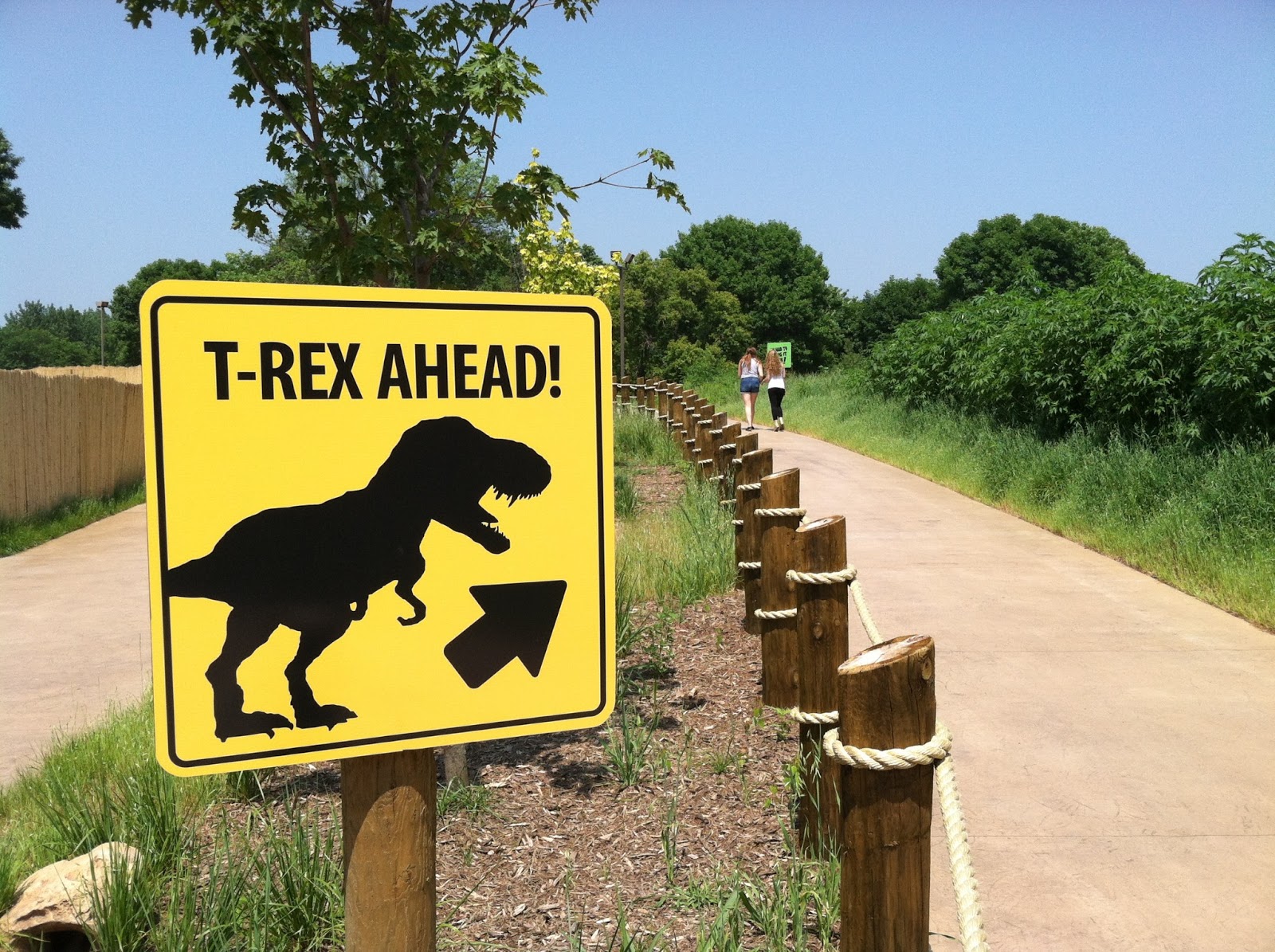 There are so many more Dinosaur photos but I would hate to bore you so...go there and see this!!
Malia and Jayme on our train ride...very dangerous and adventurous. 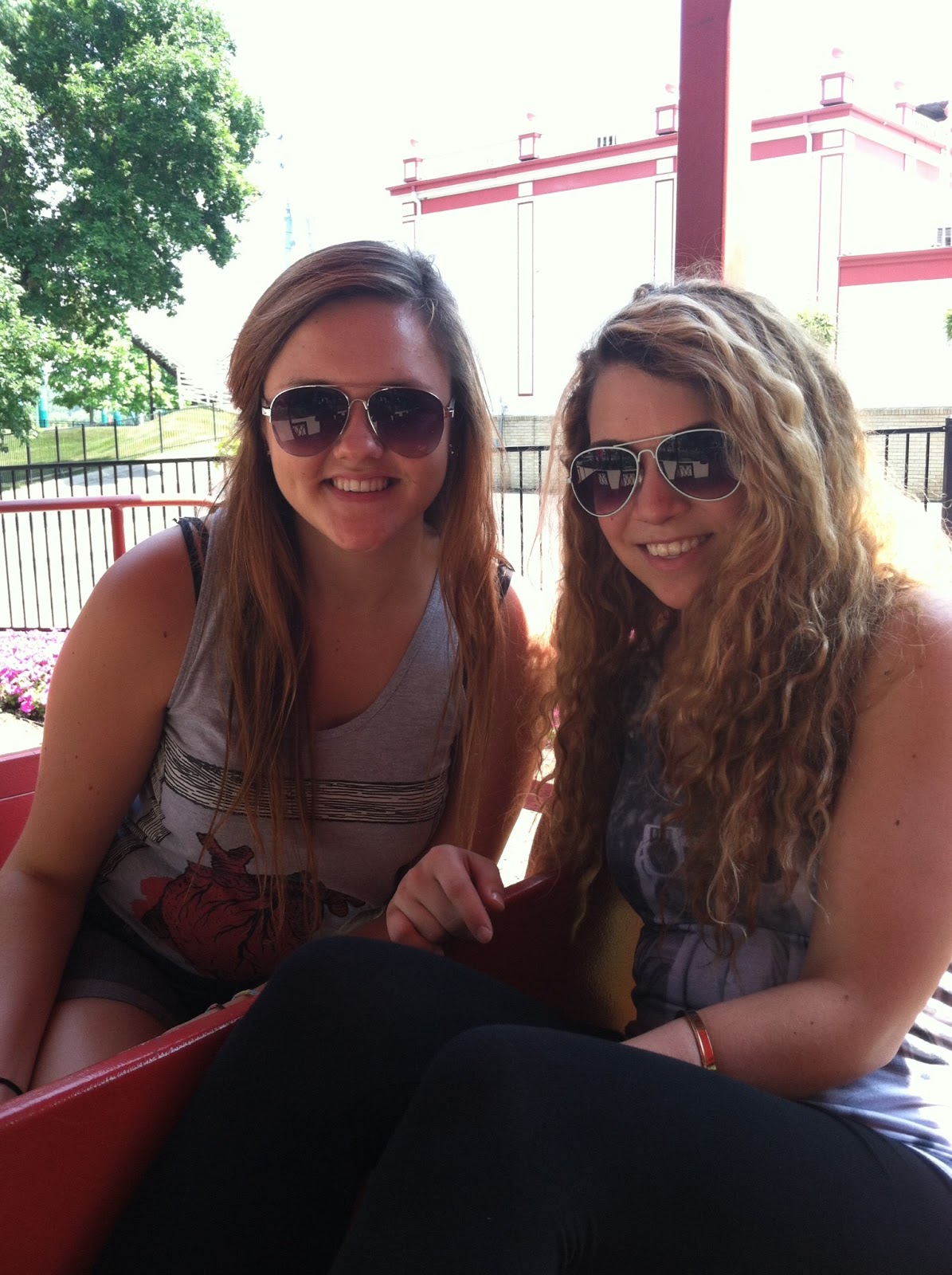 Jayme rode on her very first big roller coaster (she is very afraid of heights). It's the one in the background with the cars up at the very top. She hated it. 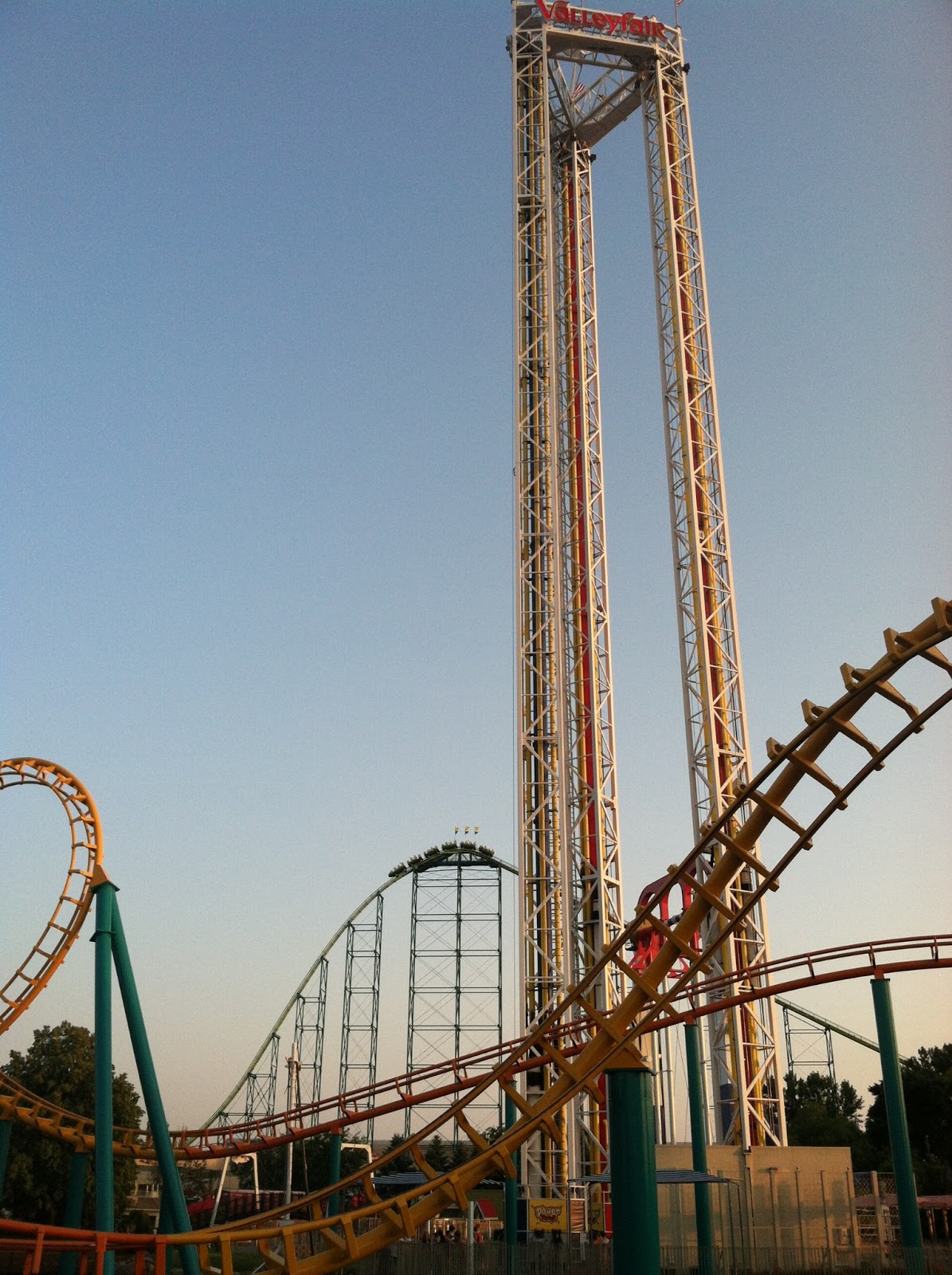 9 p.m. and time to get back on the buses. Tired and happy to be headed to the hotel. We stayed at Country Inn and Suites in Shakopee. Very nice place to stay. 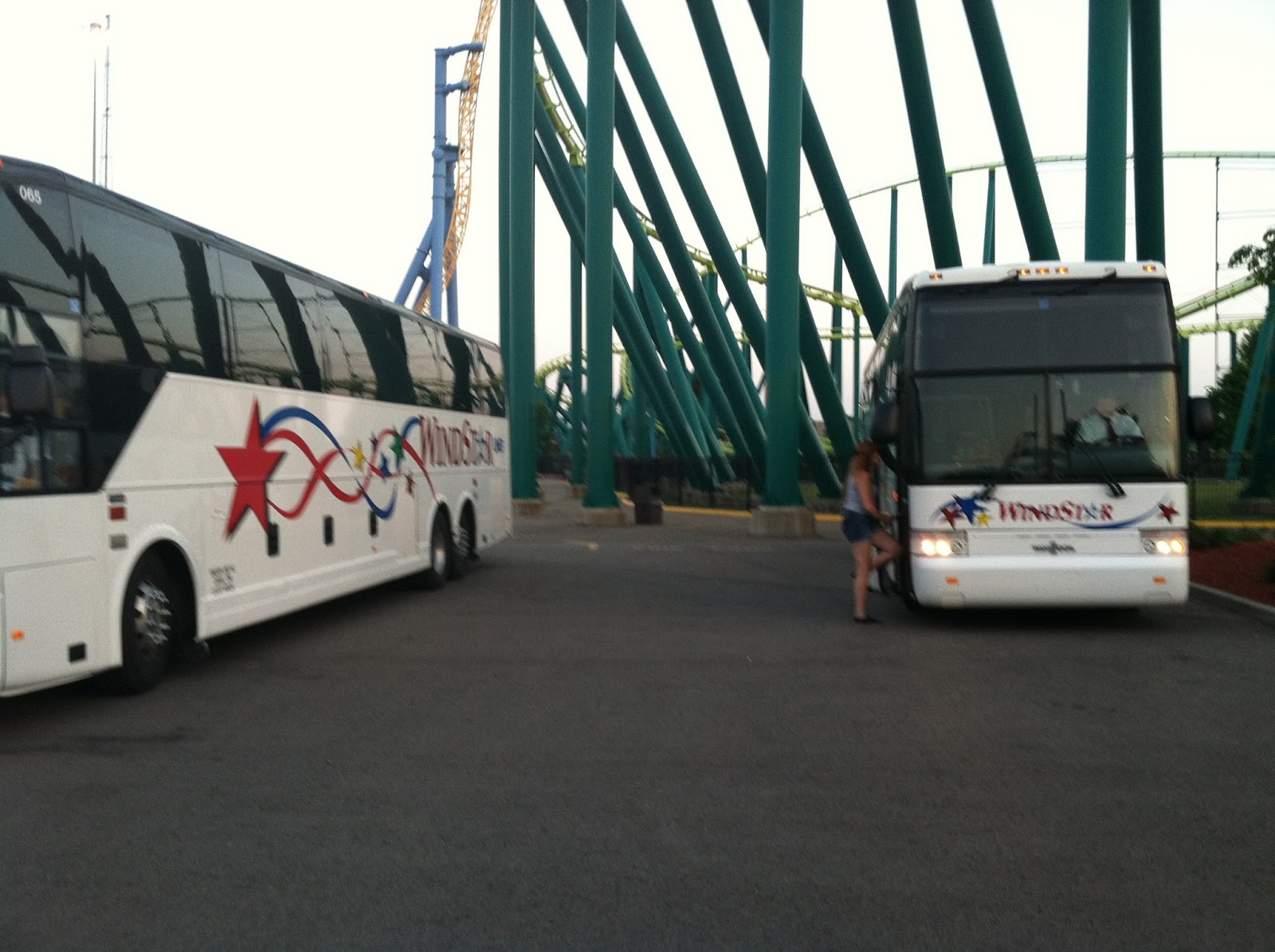 We had a very relaxing Friday morning, July 12, in Shakopee because we were staying in the same hotel that night. I washed all 74 shirts at the hotel and got them back to the owners. Believe me after performing in them 3 times and one of those out in the hot sun...they needed washed!! At 2:00 p.m. we loaded up and headed for St. Paul and the Union Gospel Mission. I think this may have been my favorite venue. The men were not too thrilled to be required to go to the concert as a requirement for getting a meal and bed for the night but at the end of the concert they gave the kids a standing ovation and stayed and talked with the kids and hugged them. I reminded the kids beforehand that maybe some of these men haven't heard anyone use their name kindly in awhile, or haven't been hugged in a long time. It was very emotional for the kids because in one of the songs there is a line "this is not my home..." When you sing that to homeless men and hear them say "Amen" and see them weeping, it is very emotional and humbling. And it is a strong reminder of why we do this. The kids did an amazing job of looking past the outside to the person inside.
While we were setting up and waiting for the concert to start, Jayme had to help Bus Driver Tim with something on his phone... 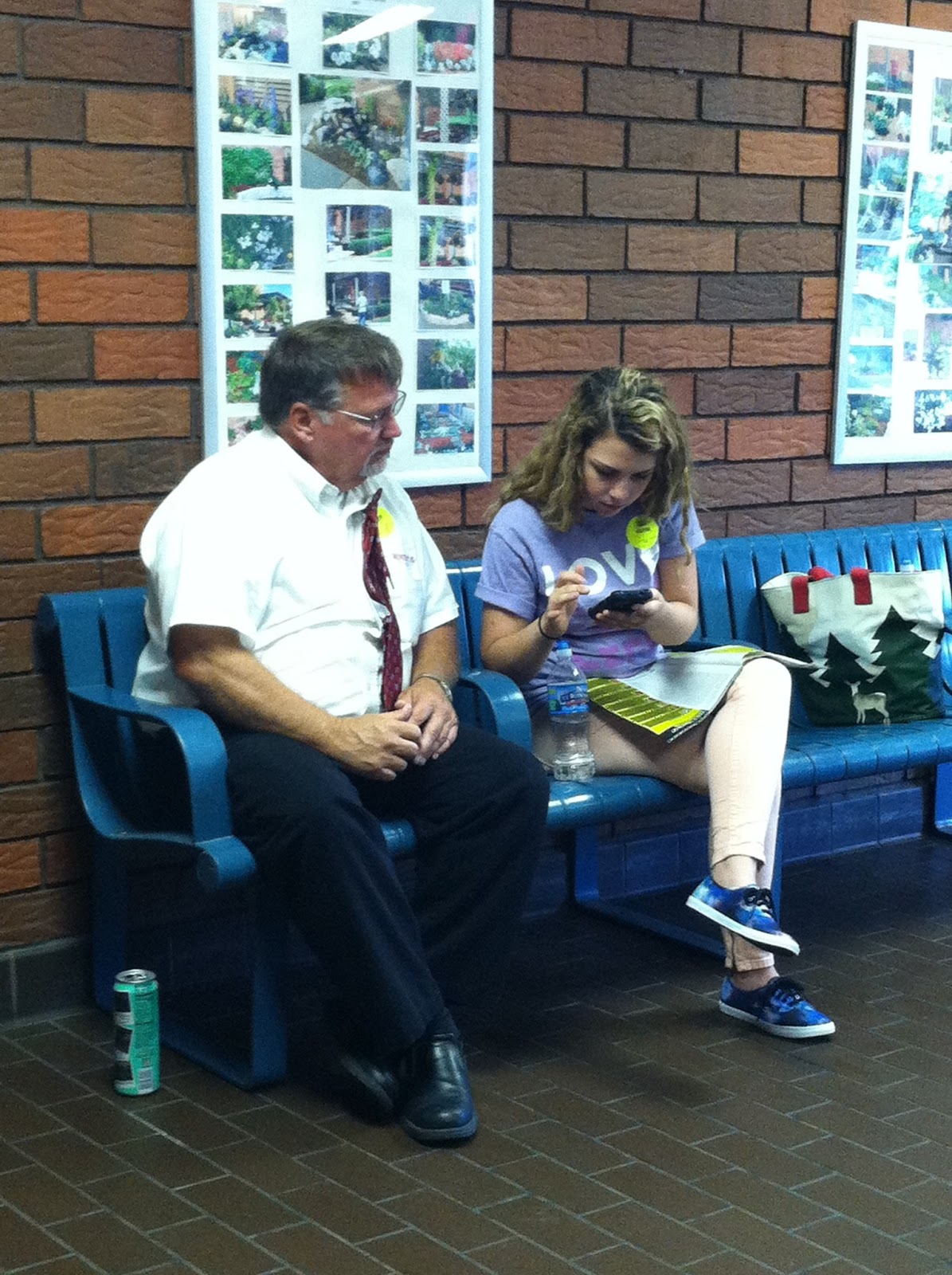 Some of the kids talking with Titus afterward. 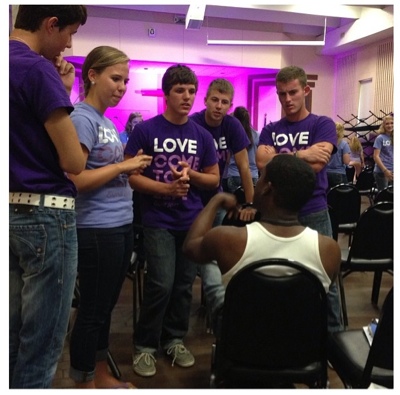 It was a quiet ride back to the hotel. We had to get up and be on the road at 6:30 a.m. on Saturday, July 13. We woke to a huge thunderstorm. The water running in the parking lot was 6" deep... pouring rain. And I had spent a sleepless night with chills and a fever and got up still in that same condition. I can tell you that an 8 hour bus ride with teenagers wasn't on my bucket list at that moment...but there was nothing else to do. They still needed to be herded and sheltered. So we headed out into the flash flood and were only 3 minutes behind schedule by the time we arrived in Beatrice, NE at Christ Community Church. 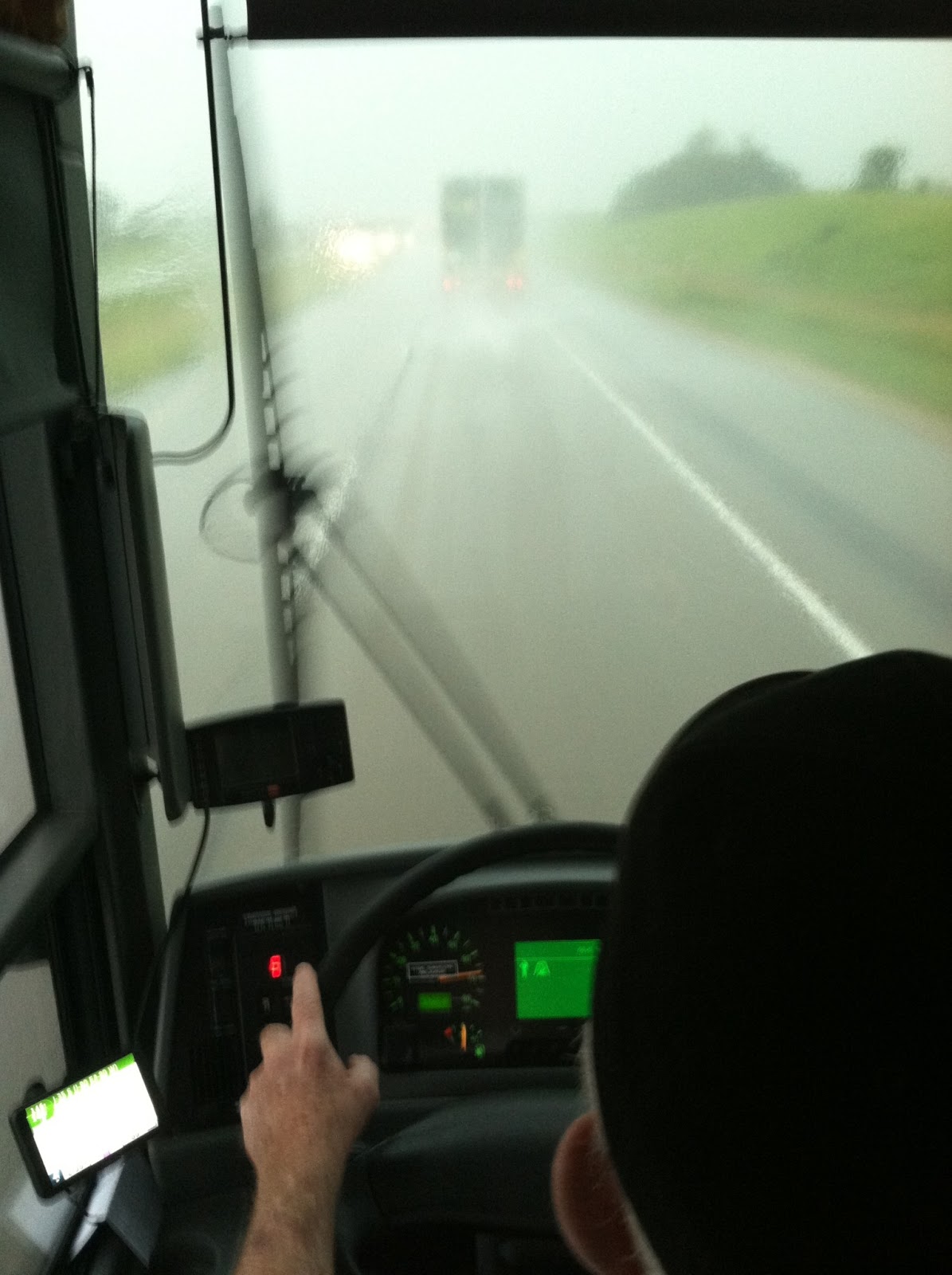 This article appeared in the Beatrice Sun or whatever it is called. The girl who wrote it called me on Thursday for and interview and when she called I was standing under a roller coaster with screaming people on it...not conducive to an interview so she called back later. I see that she quoted me as saying we gave them "meditation time" what I actually said is "we have a Bible devotional that we do every day on the bus during a quiet time..."oh well... 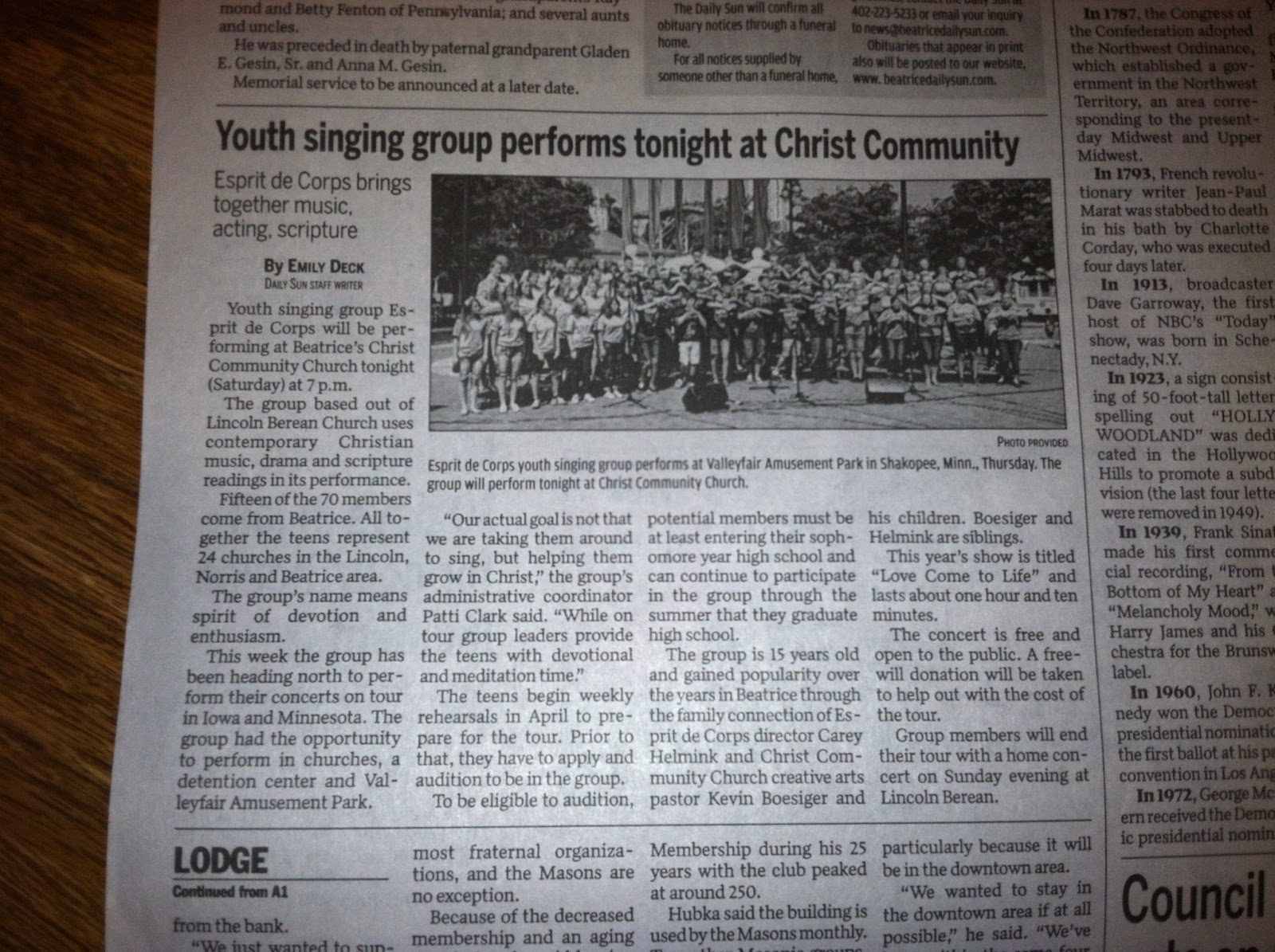 We had our concert Saturday night and then Sunday, July 14, we sang in their service. 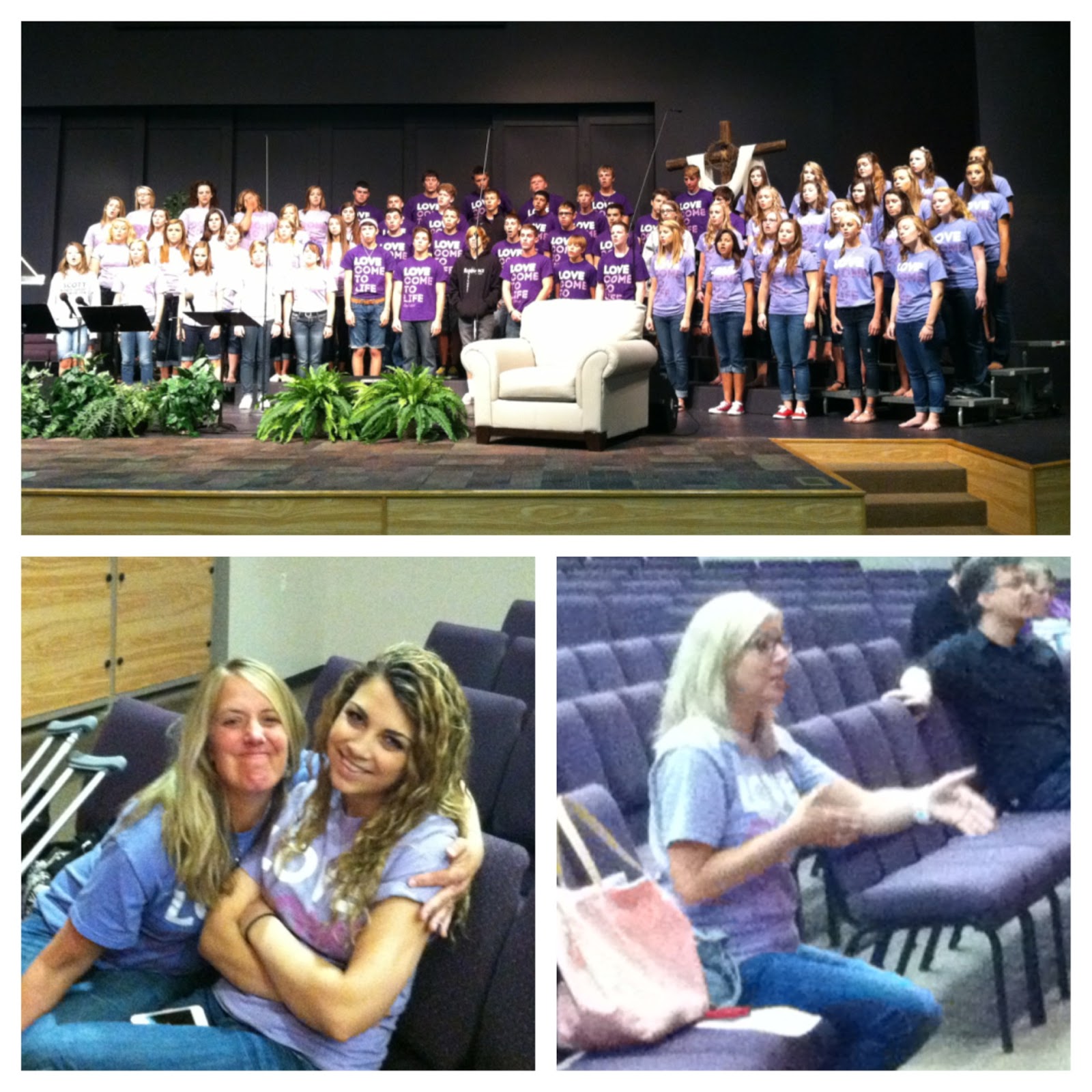 After that we headed over across the road to Beatrice State Developmental Center (BSDC) and sang for their chapel. 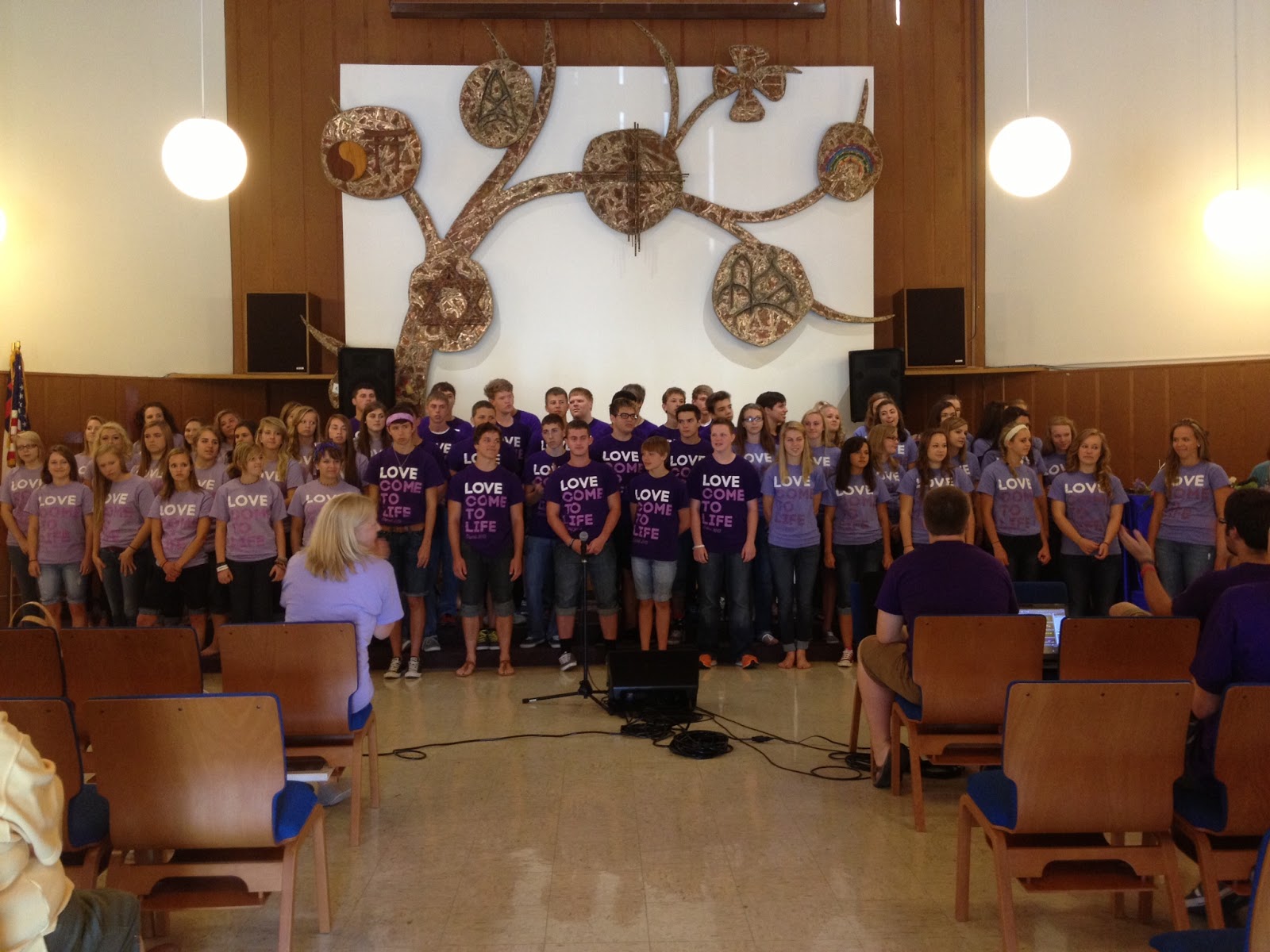 Ate some lunch and headed back to Lincoln Berean Church and our home concert. 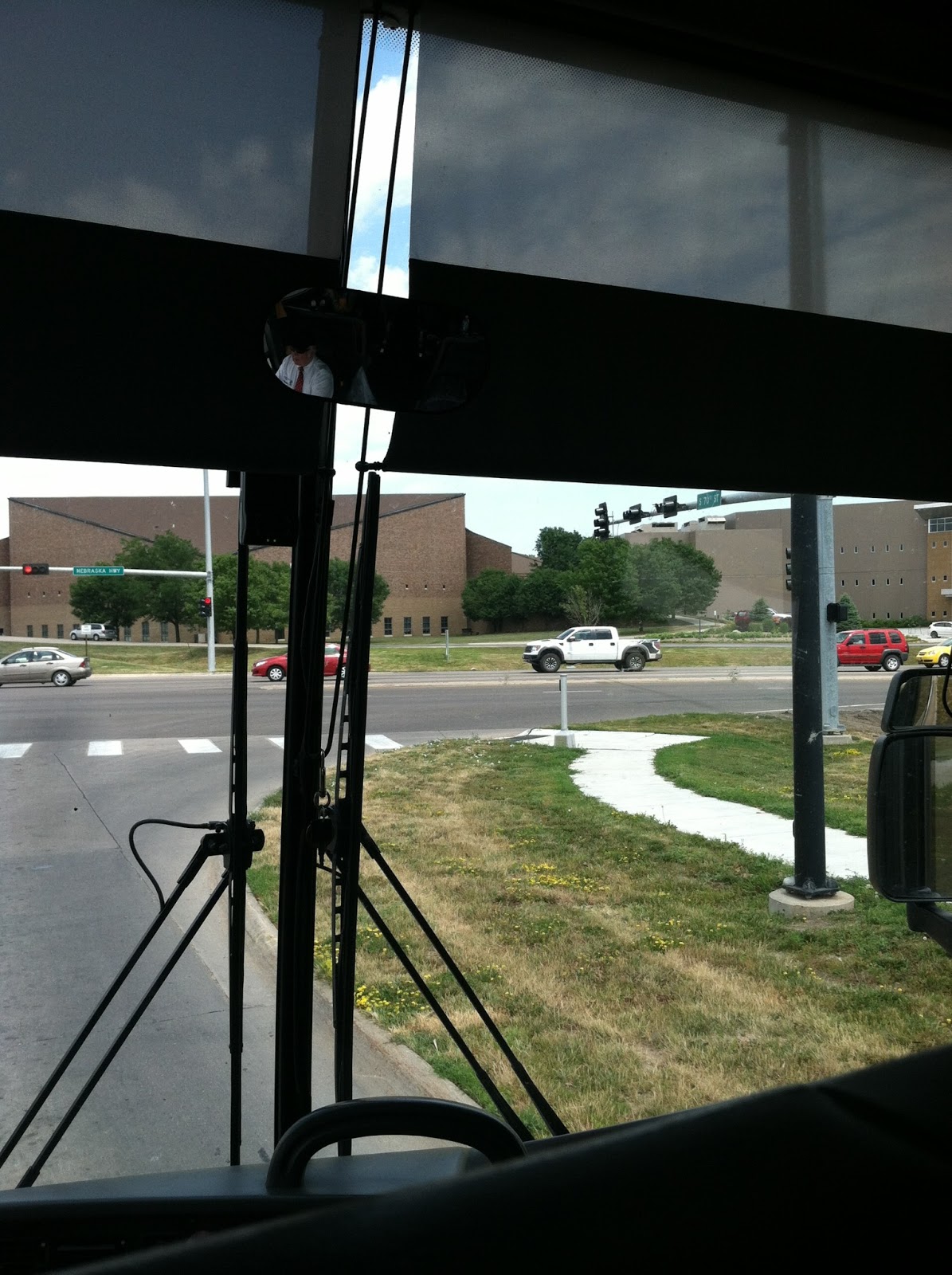 Always nice to see this view and know we are almost home.
I will not include all the home concert photos but I will just include one video of a skit on how not to act as a Christian. So funny. The boys in it are Tanner Boesiger and Caleb Petersen.
It is always a full and fun week and I am always glad that I decided to do it another year.
I love these kids.