If you recall from the last post Bryan's mom had ended up in the hospital. His sister and her family were here to visit so they took her home Wednesday, July 30th and were there with her for 4 days. She was still able to get up with help so they stayed in her home with her.
FRIDAY, AUGUST 1 - We met with the Hospice nurse from Tabitha and made the decision to sign Bryan's mom up with them. Bryan and I made the decision to move her in with us to live for as long as was needed.
MONDAY, AUGUST 4 - Hospice brought a wheel chair, hospital bed and all that we would need to care for Ferne. 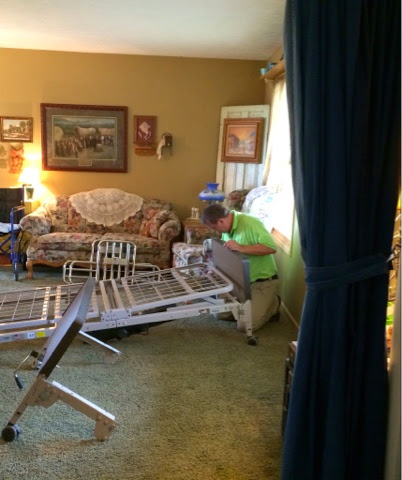 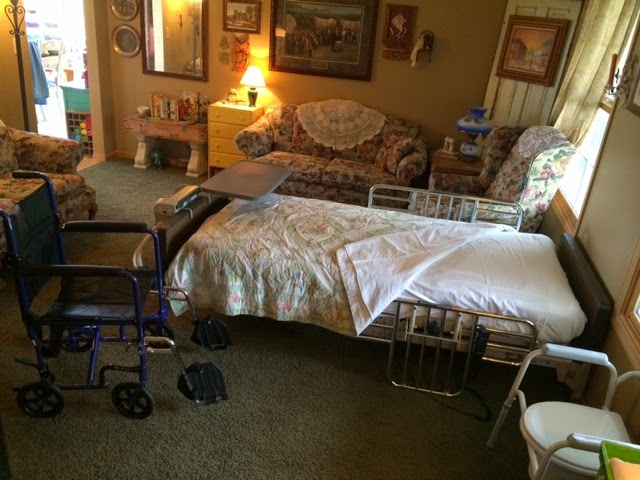 We moved Ferne in with us that afternoon. Bryan and I were completely confident that this was what we were supposed to do and that it was what we wanted to do. But we did have a wedding coming up at our house and I needed some live in help so we called my mom and she and my dad graciously consented to her coming from Montana for the two weeks and help out. She was arriving Tuesday afternoon. That evening we all sat out on the deck with Ferne and enjoyed cool, beautiful evening air. Very unusual in August in Nebraska.
TUESDAY, AUGUST 5 - Bryan's sister and her family had to leave so they said thier goodbyes. After they left Ferne called me over. She said "Thank you for having me here. I know you will take care of me." I gave her a hug and said "You can be here as long as you want." She then said "Oh I'm going to see Eugene soon." I told her I was going to have the girls come out that evening and she said she didn't think there was time. I called Bryan and he came home. 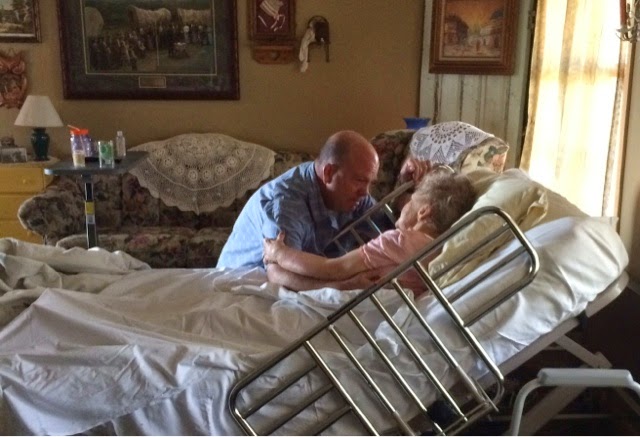 We called the girls and they all arranged their schedules so that they could come out as soon as possible. Jayme got here first. 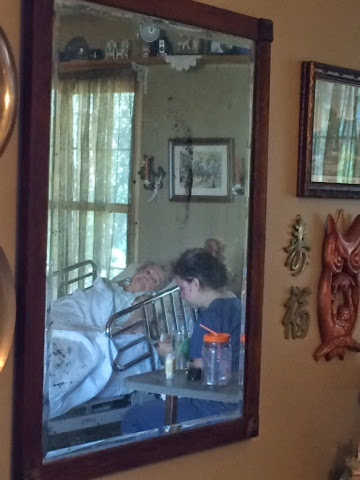 Her grandma talked with her and told her "This isn't the end for us, you know." And that is a comfort.
My friend, Kathy, went to the airport in Omaha to get my mom. So many people, so many acts of kindness. 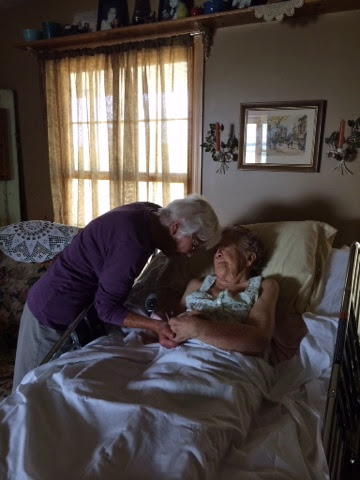 My two mom's had a sweet little time of reunion. What an amazing gift from God my mom was. I could not have done all the things that Ferne needed done had she not been here. She comforted us and tenderly cared for Ferne. I know God gives his angels guard over us, I just didn't know that sometimes they turn out to be your own mom. Most of Tuesday, Ferne only woke to say what she wanted to say to each person. She didn't even want her eyedrops in.
Jayme had to leave to fulfill a commitment to babysit Poppy. Ashley and Bobbi came a little later and when their grandma said she was itchy, they put lotion on and made her comfortable. Jon came out with food for us all and stayed to visit for the evening. Alicia, his wife (Bryan's neice) was out east with his mom helping her through a medical crisis. 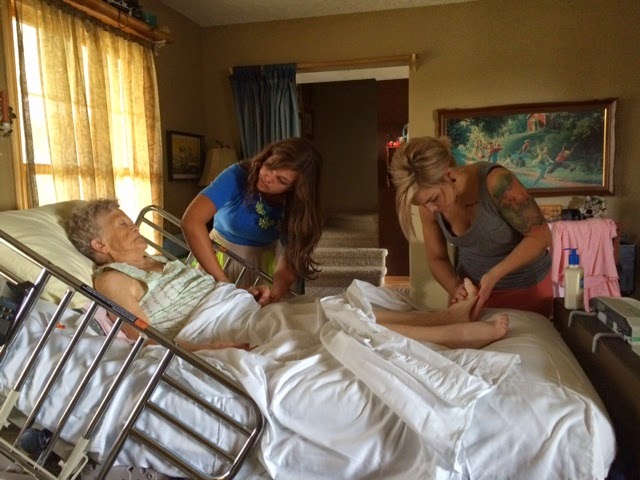 WEDNESDAY, AUGUST 6 - I went in to work. Bryan had to go in the morning to do the funeral of a friend. My mom stayed at the house with Ferne. My aunt went out and they all visited together. Then Bryan got home, later I got home and Bob and Ceila Rice came an visited Ferne for a bit. She was much more alert this day. So I thought that she was just tired out from the move and Bryan's sister leaving. We thought that she might be with us for several months at least. By Wednesday evening I was again not sure how long she would live. What a rollercoaster of emotions we were on. In all this we were doing stuff to prepare for the wedding. For the most part when he was home, Bryan spent his time in the room with his mom. We had to have a catheter put in, switch to liquid meds only and it seemed like things just were going faster than we had imagined.
I opened Ferne's Bible and it opened to this passage. 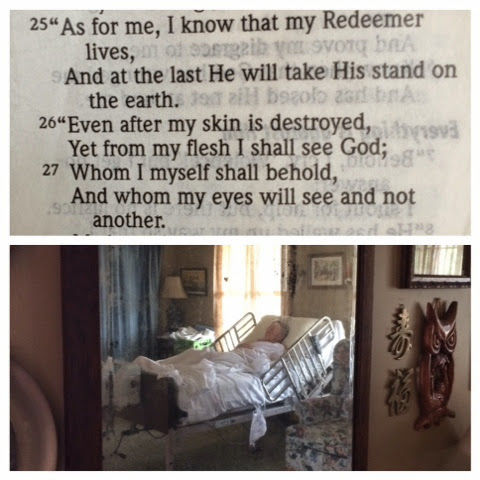 What a comfort to know the Savior!
THURSDAY, AUGUST 7 - The girls were in and out at times and all the days start to blur. Ferne was sleeping most of the time and Hospice was so helpful and loving. I went to work in the morning. Bryan and my mom were here with Ferne. My mom was cleaning rooms for the wedding when she wasn't caring for Ferne. Amazing woman. I left work early because emotionally I wasn't in the best place that day. Since I was in there Bryan took the time to finally find and eliminate that Bumblebee nest by running over it with his car...desperate times call for unique measures. But it worked. 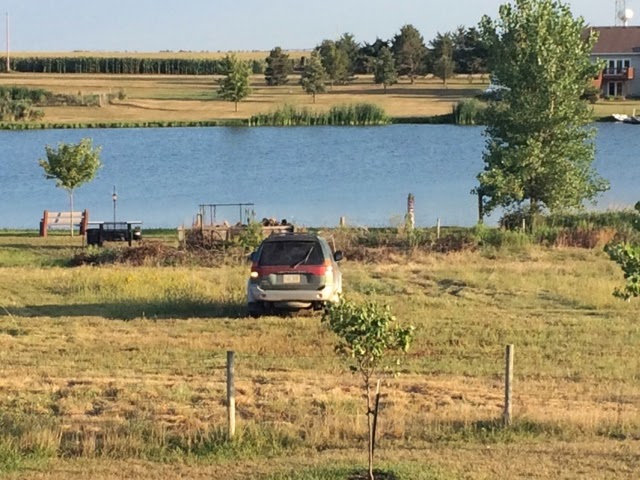 FRIDAY, AUGUST 8 - We were supposed to go to a Doobie Brothers concert that night but neither of us was comfortable with leaving so we made the choice to stay home. The girls all came out and we had a sweet evening just hanging out and caring for Ferne and looking at old pictures. When we would talk to Ferne she would seem to be aware of what we were saying and respond with and "ok" or a "no" when we asked a question. But mostly she just slept or rested. 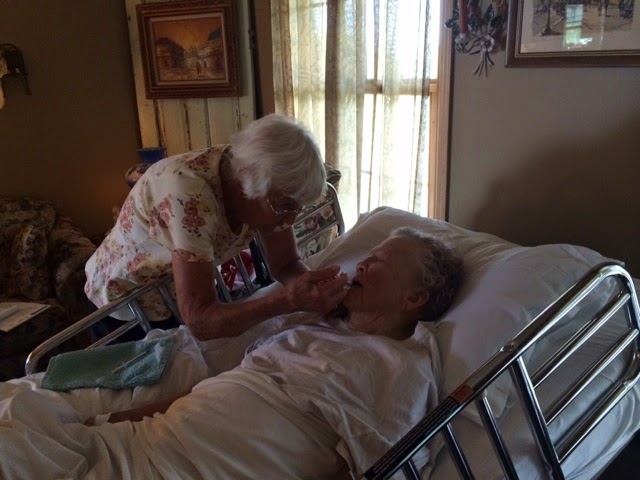 SATURDAY, AUGUST 9 - I knew I needed to at some point decorate the cookies for the wedding so I set a table up in Ferne's room (which is our front living room) and worked on decorating the cookies.
He sat in with us while I decorated. Lots of time for talk and quiet. Bryan still had to preach that weekend on Saturday night and Sunday morning, so in between sleeping on the couch ( or rather laying on the couch and not sleeping from Tuesday - Sunday) he had to study. All day Ferne would say "Bryan?" and when he would say "I'm here, Mom." she would say, "I love you." She must have done this 10 times that day.
Alicia got back from Pittsburgh late and headed out to see her grandma and spend the night. 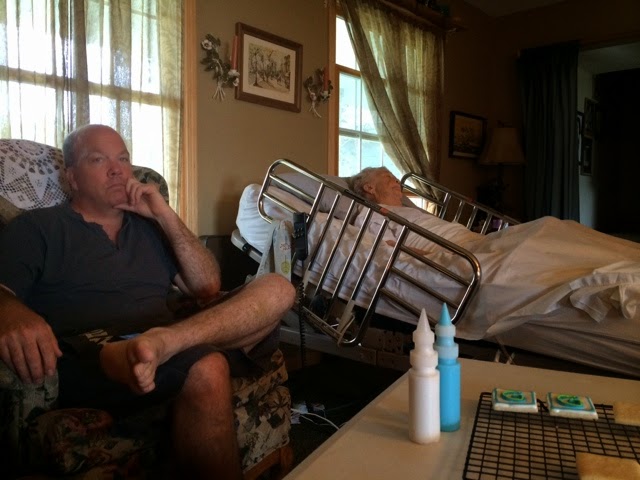 SUNDAY, AUGUST 10 - I wanted my mom to be able to go to church and since Alicia was here with me, my mom headed in with Bryan. 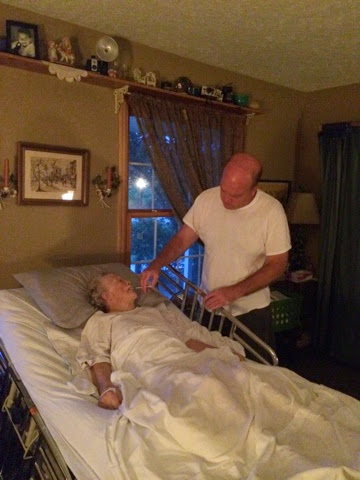 Before he left he gave his mom her meds, told her he was going in to preach and that he loved her. We had begun to hear the fluid building up.
Bobbi sent me a scripture reference in a text and when I looked it up in Ferne's Bible it was underlined in red. 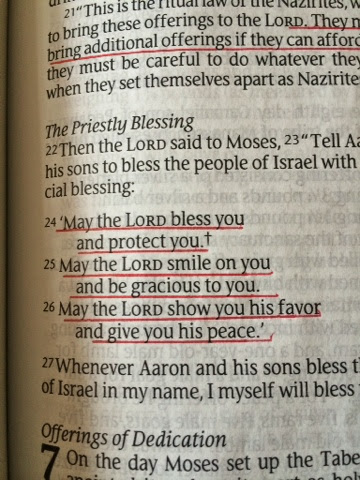 Then when I read it to Alicia she said "Oh my choir sang a song that is just those verses and it was one of Grandma's favorite songs." So she found it on her phone and placed it by Ferne's head and played the song for her. We called the Hospice nurse to come because the fluid build up was getting beyond what the two of us felt comfortable dealing with. The nurse came and helped and was so gracious and kind and loving to all of us. Very reassuring. She got Ferne more comfortable, administered some meds to control the fluids and hugged us both before she left. Alicia and I just sat in the room and talked about many things. 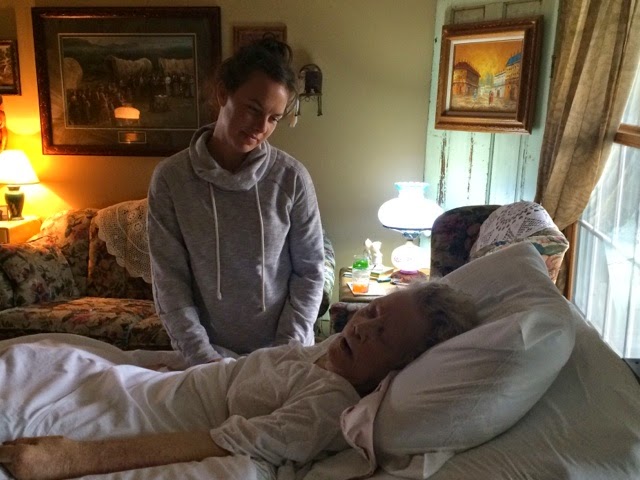 Bryan got home from church at about 1. He went in to see his mom and told her he was home from church. My mom had gone to lunch with my aunt. Ashley and Jayme both arrived. Alicia decided that she should head home so she left. I got Bryan's lunch ready and he took his plate into the room to eat. I was out with Jayme in the kitchen and Bryan stepped around the doorway and said "Something just changed." I went in and felt Ferne's pulse. It was weak. Her breathing was almost nonexistent. She took a breath. We kissed her and told her we loved her. Then a few minutes later she took a last small breath and there was no more pulse. The words to the song "Untitled Hymn" were running through my mind "Fly to Jesus, Fly to Jesus and live..." It was a peaceful, sad, beautiful moment. We called Alicia, Bobbi and Travis and my mom. They all headed back out.
So at 1:30 p.m. Sunday, August 10, 2014, Ferne Marie (Vincent) Clark stepped into the arms of Jesus and was home.
Posted by Patti Clark at 8/19/2014 08:00:00 AM