If you have adult children, you know how hard it is to get everyone's schedule to coordinate. Several months ago Jayme took it upon herself to arrange a family outing to World's of Fun. After much text sending and "That day doesn't work for me" we finally all settled on August, 23. Bryan was still on his vacation time so we planned it! So extremely glad we did. It was such a fun day. Perfect weather, ok maybe a little hot but not in the shade. The lines were almost non-existent and everyone was able to make it. We headed down Saturday morning early and got there about when it opened. First things first we had to find a locker to store all our towels and stuff for Oceans of Fun later. Then on to the rides. You will notice a complete lack of photos of me going on rides...that's because I don't ride them.

First ride...The Boomerang. I got dizzy just watching. Travis was much more brave than I. He went on all the rides even though he doesn't love them. 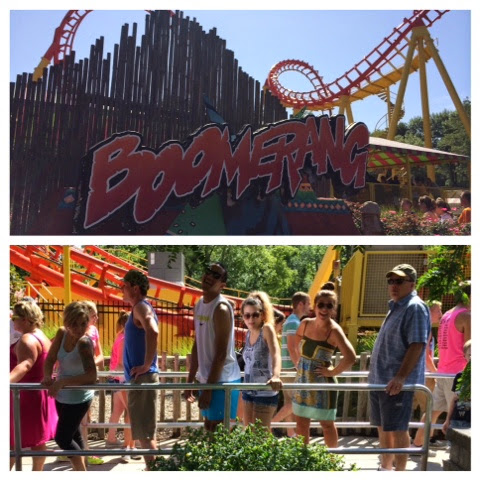 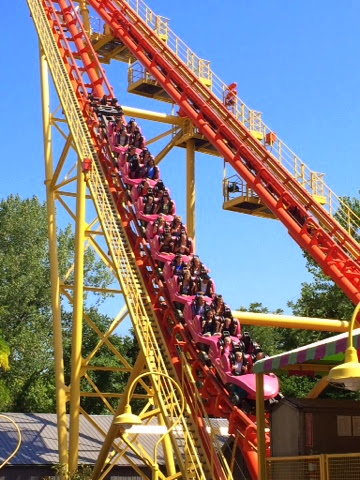 and upside down (really glad I am not on this) I'll just take pictures, thanks. 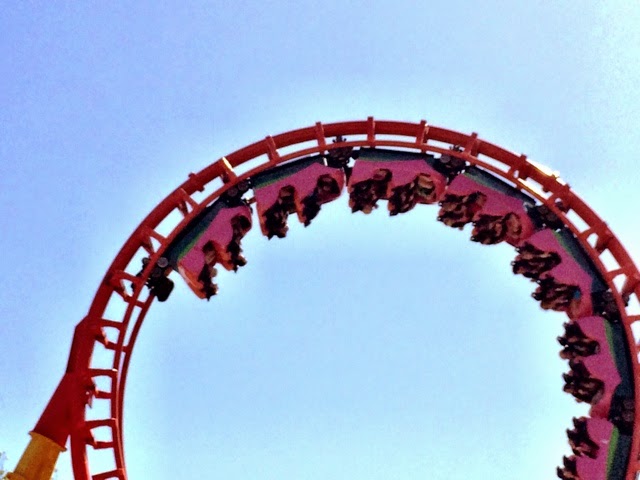 On to the next ride...Some tower thing that zooms up and free falls then up...you get the idea. 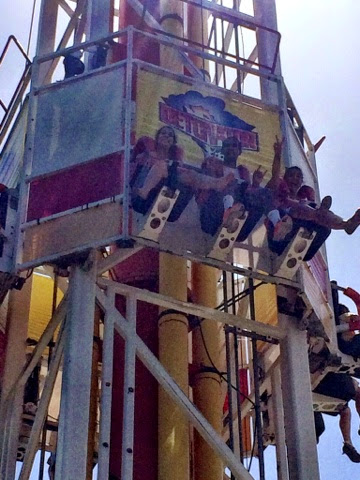 These next ones are on the Mamba. I love the one where the cars went right past me. Trey was yelling "Hi Patti-kins!" Bryan and Travis look thrilled... 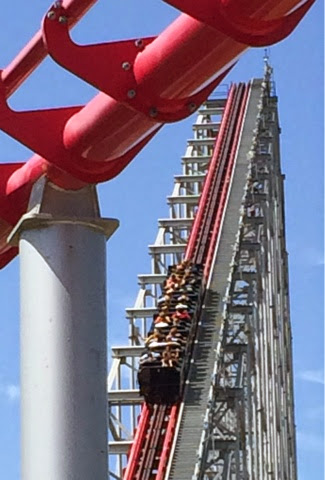 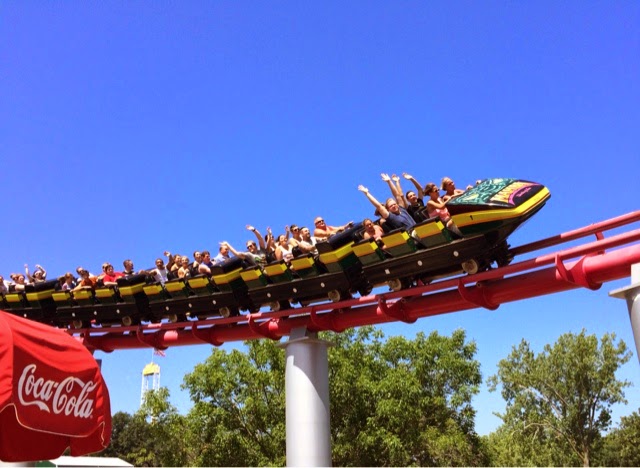 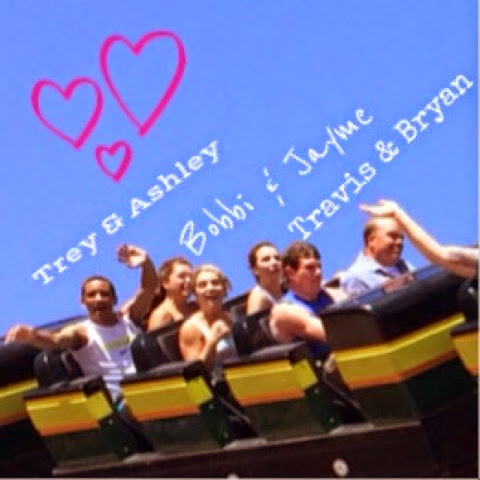 It seems appropriate that they went on so many rollercoasters since our last month had been a rollercoaster of emotions.

Everyone except Bryan and I did the Skyline. OH my word!! They were put into a sling harnass thing and the cable pulled them to the top of a 198 foot tower, one of them had to pull the release and they fall down and swing out and up on a line! It made me almost pass out to just watch it. Travis and Jayme did it twice! 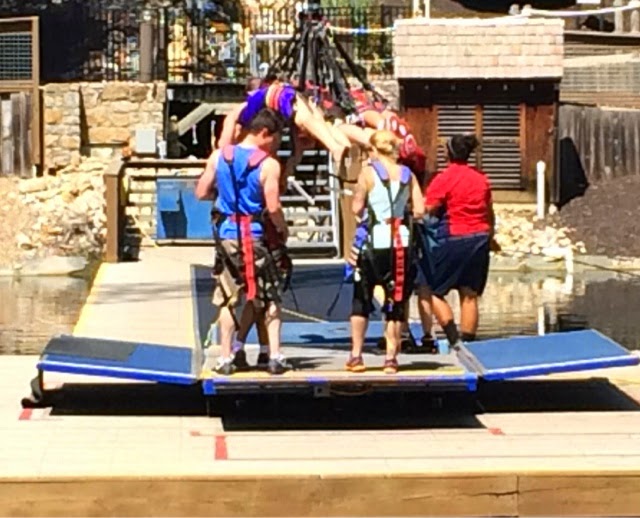 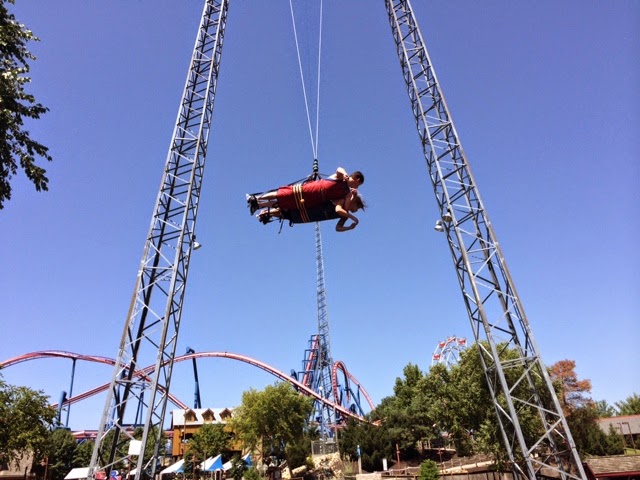 Next up, Jayme and Trey. Shortly after this I decided that I could handle a little ride that looked harmless...from the ground maybe...I didn't open my eyes and sincerely wished that it was over as soon as it started. Bobbi said that as soon as their car started they all decided that I was really going to hate it. It was called The Spinning Dragon...I added "From Hell" to that name after I got off.

We went and ate some lunch then headed over to the Ocean's of Fun side. We all went on the Fury of The Nile and the Viking Voyager. It was much more crowed on that side but refreshing and fun. Bryan napped on a chair in the shade, Bobbi and Travis went exploring. Ashley, Jayme, Trey and I went down a slide then they went to see what else they could do so I went and laid in the shade and rested also. People watched mostly. Then I noticed a Dad and Mom frantically looking around for a child. Went over and asked if I could help. They described her to me and I set off. Then I saw what I thought was her out in the middle of the large pool on a floating alligator with a bunch of other kids. I went and found the mom and asked her if that was her little girl. She burst into tears, hugged me and hugged me then jumped in the pool and went over to her. The dad was still over on another side looking and calling so I went and pointed them out to him. He grabs my hand and says "You are a hero. How can we ever thank you!!?" Poor little girl, she didn't realize she was lost until they told her...
Our family regathered and we decided to head out. But everyone wanted to ride a few more rides so we went back to the rides and they rode. Travis wanted to do the Skyline one more time and since Ashley hadn't done it the first time she went with him. Then Jayme wanted to go one more time also so it was the 3 of them.
Bobbi took the best video of the last ride. The last time was Ashley, Travis and Jayme.
After that we headed to the lockers, gathered our stuff and headed over ot the hotel. We changed, and then a hotel shuttle took us to a BBQ joint called Smokin Guns. It was so good and so much food! Totally a joint though. Don't expect white tablecloths and fabric napkins. It was featured on the show "Diners, Drive-Ins and Dives" Well worth going to.
We all ate breakfast together at the hotel then Travis and Bobbi headed home and the rest of us went on our way stopping at a few antique stores along the way.
It was such a fun, momorable weekend. So glad everyone had the time to do it.
Posted by Patti Clark at 9/02/2014 01:03:00 PM