Last Antiquing of the Winter...

Yesterday, after a week of cold snow/rain weather, Bryan decided we needed an evening of antique stores and Cracker Barrel. We invited Jayme along (Bobbi is still in Alaska and Ashley is still in Spain) and off we went to Aardvark Antique Mall. While there Jayme found an amazing dress for $30 discounted 25%. 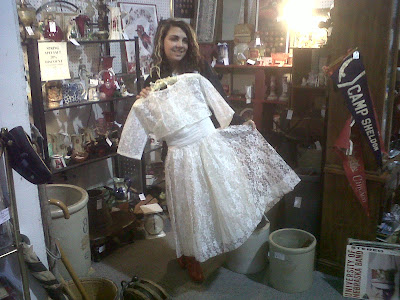 This picture really doesn't do it justice. It is probably a 1950's or 1960's wedding dress. Brand new (tags still on it) the little sleeved top removes and it is sleeveless. The little lace top has pearl buttons on the back and the white material on the waistband drops down in folds on the back. So very vintage, so very Jayme. When she walked away from the counter, after paying for it, the lady says to me "Is your little girl going to wear that dress to her prom?" I just said "Oh, that little girl is almost 20, so no." She says "Oh, she's so little."
Side note: At supper later Bryan said to Jayme "If you wear that dress, your pink heels and pearls to the hockey game on Saturday night this week I will buy you any hockey jersey you want." Jayme gets a Cheshire Cat grin on her face and says "You might want to rethink that offer since the one I want is $400."
My find at the Mall was a little less glamorous. 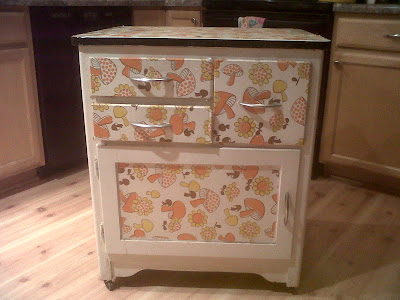 But I was sure that I saw a diamond in the rough. 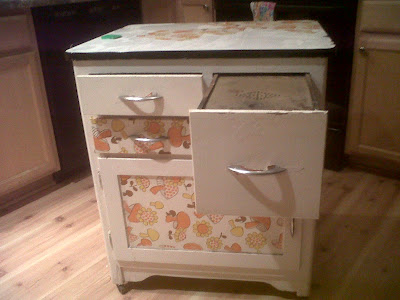 The flour bin was in great shape, not rusted out at all. 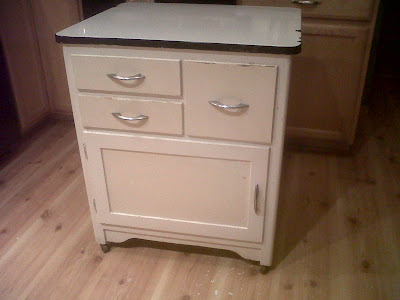 The ugly 1960's contact peeled right off and when I washed it all up it made a sweet little cabinet with an enamel top. Sure there are a few chips in that top but it is probably as old as me and well, I have developed flaws too so...
Not sure where I will put it but with some rearranging I will get that taken care of. It actually makes a great little center island if I need one, the bonus to that being that it has wheels on the legs.
Posted by Patti Clark at 3/28/2011 10:02:00 AM