New Toys put to good use...

Bryan's niece and nephew, Alicia and Jon, produce a TV show called "Footnote". If you have never heard of or seen this, check it out. www.fntv.com It airs on WGN and you can also watch it online. Anyway...Episode 4: Lost and Found just aired and after watching it I was inspired to make Jon and Alicia some cookie pops with a Footnote TV theme. So here is  the process. (As I have said before, any excuse to make and decorate cookies...) 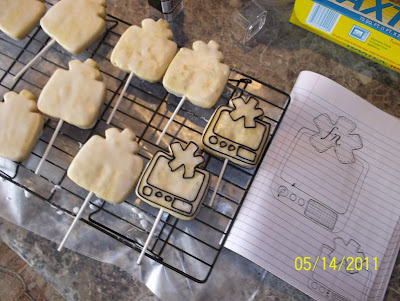 Their logo is the five pointed * so I dug through my cookie cutters and couldn't find one like that but had this one that is supposed to be a present with a bow on top. LIGHTBULB. I could make it look like an old TV with their logo on top. First I drew the design on paper to make sure it worked. Then outlined in black royal icing. 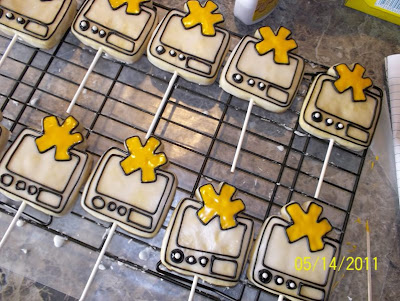 Flooded the logo with dark yellow flood icing and added pearls for the buttons. 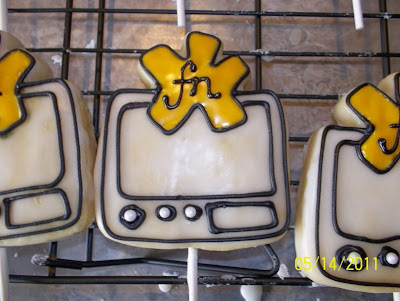 Let the yellow set up, then added the fn. 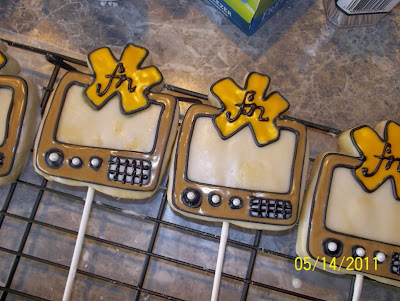 Mixed up a brown flood icing and went around the outside of the wood on the TV. Made the grid on the speaker. 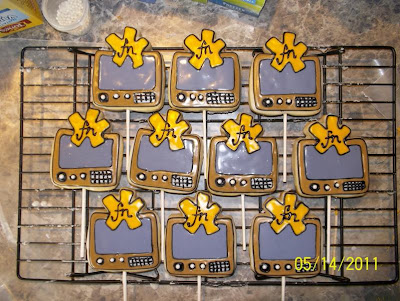 And finally flooded the screen with gray
(which is actually looking more purple in real life. Oh well)
I think they turned out exactly like I saw them in my head,
so that is great in my book.
My new little bottles worked amazing and made it so much easier to use different colors quickly.
This might also be a good time to mention that the pilot for Bryan's TV show (also produced by Jon and Alicia) went before the board at Back To The Bible this week and they didn't say no...so..."Between Sundays" (working title) may be ready to be promoted to TV stations pretty soon. It is to be the next step for people after they watch Footnote. I probably said that all wrong but...I'm just the preacher's wife so all I really need to do is have big hair and wear lots of makeup...done...on to the next thing.
Posted by Patti Clark at 5/14/2011 12:40:00 PM