July 2 Esprit was singing at Berean in the services. Ok I took a selfie...to send to the kids in KC. They had sent a text to ask what I was doing. 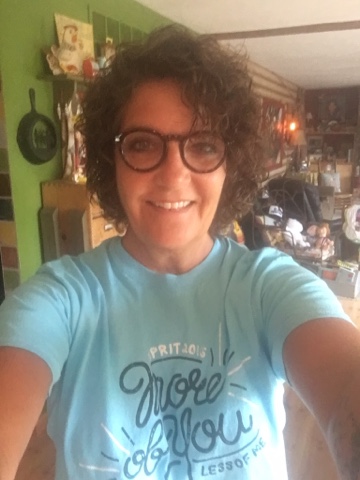 July 3 they sang in the services and we had our first concert in Firth.
July 4 Bryan and I went to Fairbury, NE to their big Flea Market. It was fun. Ashley and some friends had gone to Lander, WY to visit other friends. Bobbi and Travis had other plans. Jayme and Trey had plans with his family. So it was a quiet 4th for us. I finished up getting ready to go on tour the next day.
July 5 I headed out for tour and a week of travel with 70 teenagers and 6 adults not counting our bus drivers! We were in Beatrice, NE that night, July 6 we headed to McCook, NE for our concert there.
Thursday, July 7 we drove to Bailey, CO and Camp IdRaHaJe. Everytime we have been there deer wander down when we are singing to see what we are doing. 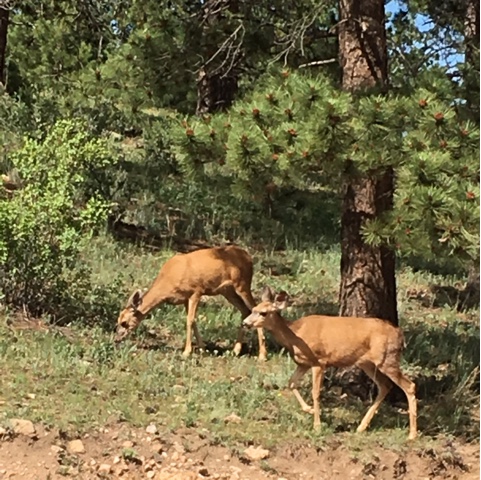 One of the boys went on a little hike and picked me some flowers. 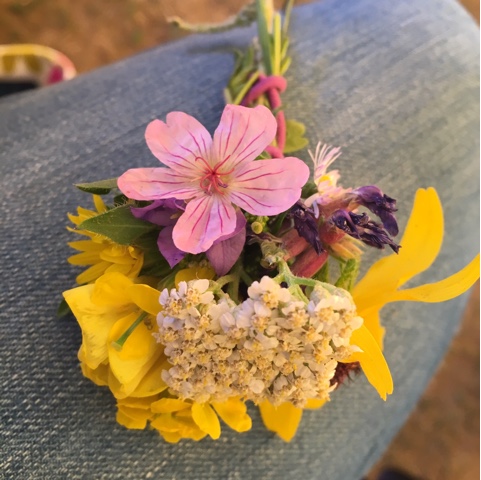 Our buses in the sunset at camp. 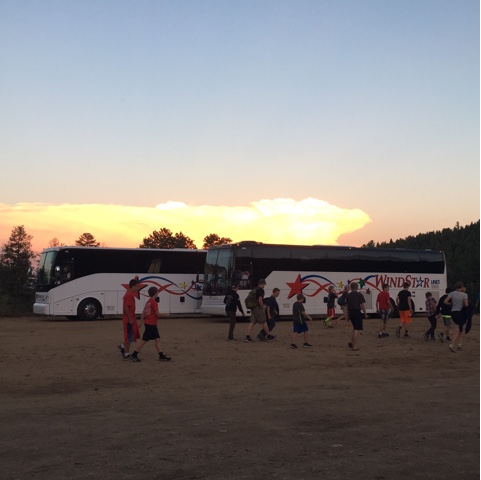 Friday, July 8 we were in Westminster, CO to sing at a park there. Saturday, July 9 we were in Ogallala, NE. This sweet little lady came up to me afterwards and asked if we needed a tour grandma to travel with us. She was just so cute! 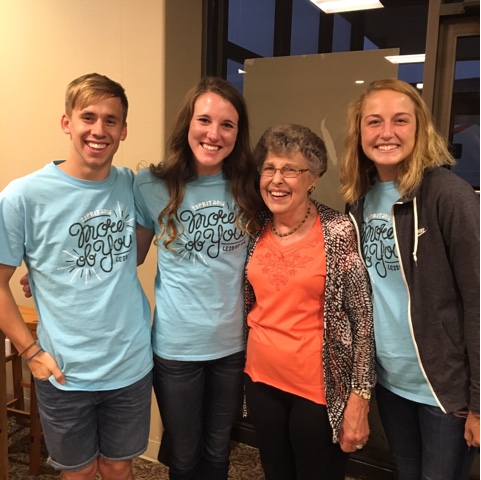 Sunday, July 10 was our final concert at Lincoln Beren Church. I got home that evening and crashed. It is always a good time on tour but always so good to be home.
July 11 I got some great letters from the kids 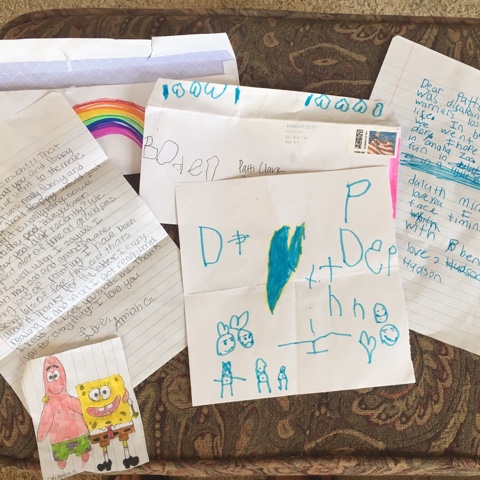 and it was my dad's birthday and my sister, Jenny, was coming through on her way to Montana. All the kids came out for supper. It was a fun time. Jenny had a friend, Julie Darden, with her that we knew in Korea clear back when we were in 6th and 8th grade. It was so good to see Jen. I neglected to take a single picture...
But I did take a picture of this. Bryan putting rock under the pool deck. It looks so nice! It seems everytime Jen comes he is doing something to the pool. Last year we were setting it up when she came. 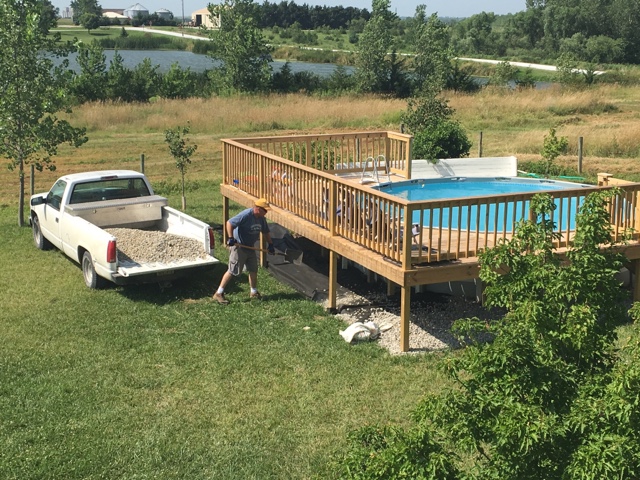 Since I have already blogged about the Kid-Cation I won't repeat that here but will move on to the next thing.
July 20 Bryan, Trey and Travis were all out target shooting so Jayme and Poppy came with Trey so they could hang out here.
She loves Mae. Pretty sure the feeling is mutual. 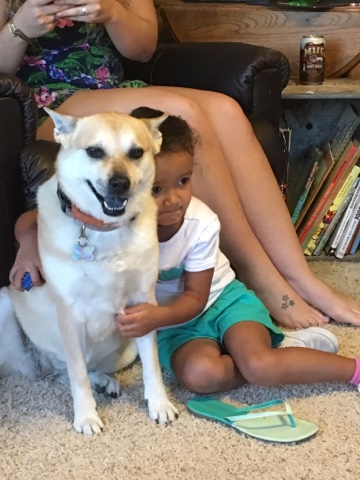 Poppy had found a clicker for training dogs and Mae apparently thought my lap was the safest place to get away from her and that clicker. She had said "I'm going to terrorize Oli with the clicker!" It cracked us up. So we all cuddled on the couch instead. 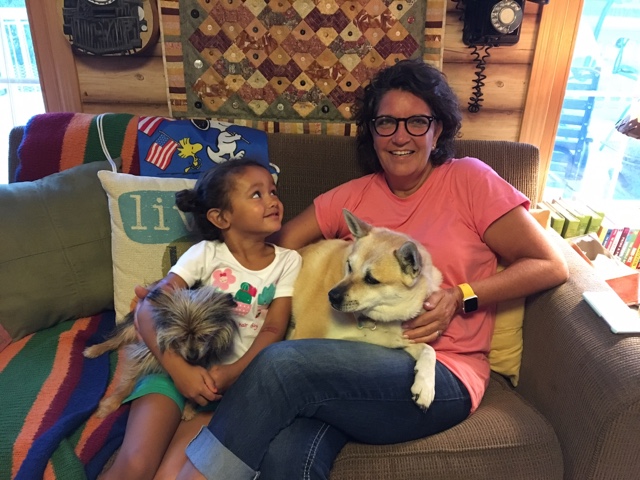 July 23 and Letti would have been 3 months old. 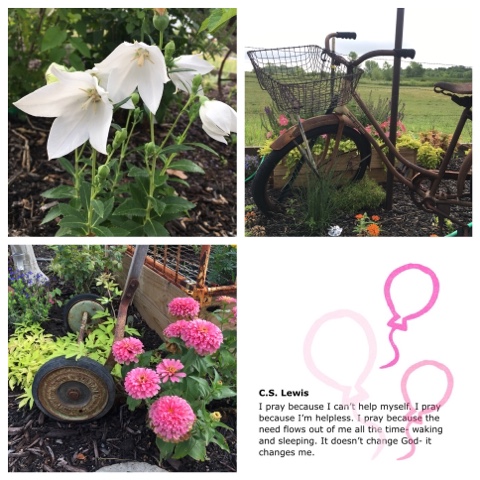 July 25 we have been married 35 years. Amazing seems like it hasn't been that long. 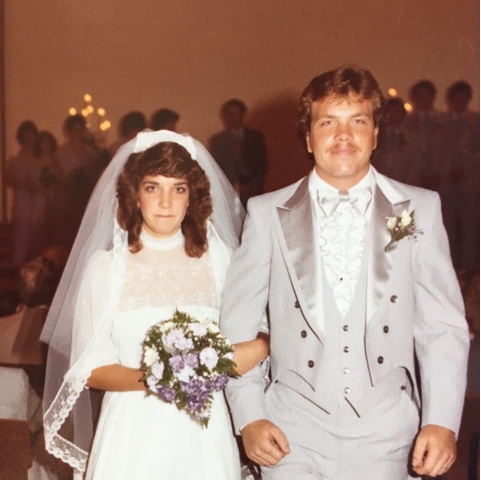 Thanks to both our sets of parents for their example of enduring marriage. 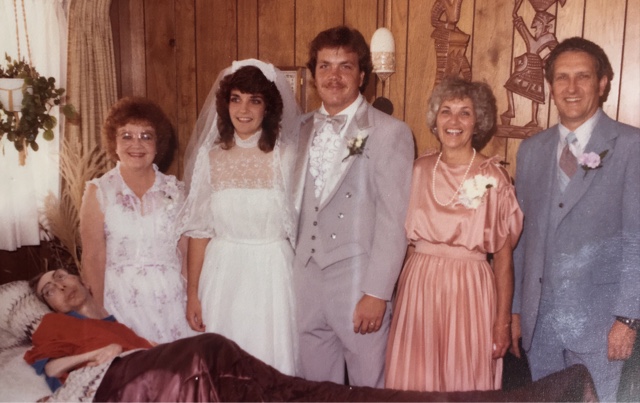 So thankful for the years we have had together. Sharing our joys and dividing our sorrows. 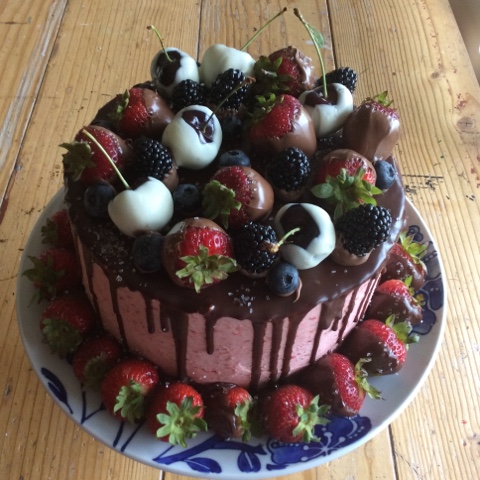 All our kids came out for supper plus Alicia, Jon and their kids and Jake and Jill Elswick. In other words, all our kids! I made a cake for dessert. Then some swimming was required. It was a very fun day.
Wednesday, July 27 Trey and Bryan were invited to go out to a guys house and shoot some of his guns. I was going in to watch Poppy for Trey. Right before they were supposed to go Trey sliced his finger and needed stitches so Bryan took him to the emergency room to get that done and I watched Poppy. After all that we went out to eat supper with Trey and Poppy because Ashley had gotten tickets for herself, Bobbi and Jayme to go to Circ de Soliel and out to dinner. Bryan and Trey decided that Famous Dave's would be good. Poppy ordered bbq chicken. The waitress came back and said that they had gotten a huge to go order and were out of bbq chicken. Poppy immediately started sobbing into my shoulder unconsolably. The waitress just kept apologizing and we picked something else for the crying child. When our food came out the waitress gave Poppy hers and it was a BBQ chicken leg and thigh. She said "I told the kitchen they made a 3 year old cry and they made her her own chicken." Now that is service. Thanks, Famous Daves. 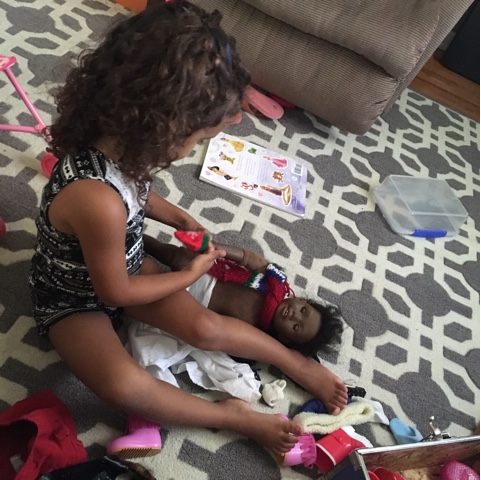 On Fiday, July 29 Travis called me and told me to look up live crawfish and that he wanted to have a crawfish boil. So we decided to order some and plan a crawfish boil for August. I loved all the colors and textures in the pictures so I decided to make some cookies to put in the freezer for the day that we have the boil. I was pretty happy with the outcome on the cookies. Travis cracks me up and I just love him! I love that he knows he can call me and ask me to have a party. So the cookies are ready for the party. The cicadas have hatched and by my calculations Spetember 2 could be a frosty night. We shall see! 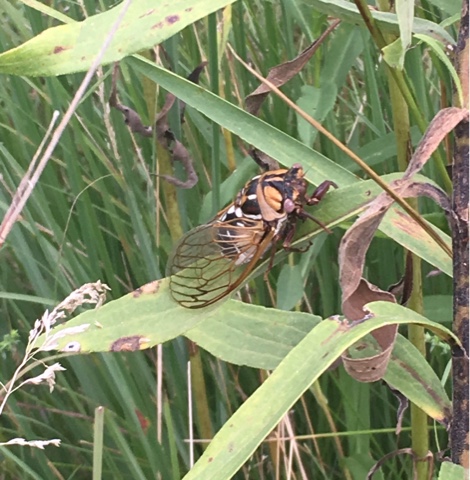 So July is past and I have caught up. Going back was emotionally exhausting at times. I would love to be blogging all happy things but the grief is part of our story.
Posted by Patti Clark at 7/31/2016 08:27:00 PM